From the day of its foundation in 2003, GEOTECH Company has been constantly increasing its activity both in engineering geophysical surveys and promotion of advanced geophysical equipment.

Being a widely recognized Russian leader, in our work we hold the strategy based on the concept of hi-tech development and best Russian tradition of engineering geology and geophysics.

During its existence the company has accumulated solid material resources enabling solution of complex problems by various methods depending on customer's demands and has put together a team of responsible, obliging and result-oriented professionals who transform problems and difficulties of any project into new possibilities for development of our customers.

Persistent work on new hardware developments, fast response to individual resquirements of each customer allow us to place our experience, professionalism and optimism at the service of a customer and each time to prove high quality standards of works, leadership in the industry and partners' trust. 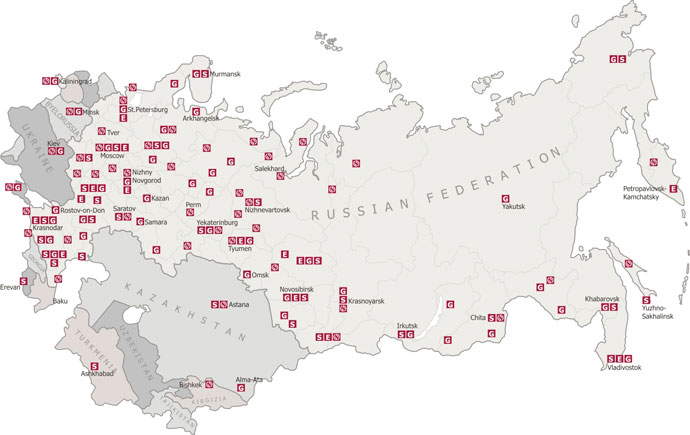 Geotech is a leader in the production of GPRs, seismic and electrical survey equipment. It occupies a leading position in the development and production of security equipment – GPR-detectors for detection of people behind walls, GPR  for finding people under rubble, instruments for finding mine explosive devices, armed caches, explosives, etc. The company develops new methods of engineering surveys, performs complex geophysical studies on the territory of roads and railways, airports, objects of housing and capital construction, hydraulic structures, as well as surveys for the oil and gas industry.

The history of the company dates back to 1989, when the leading developers of the Scientific Research Institute of Instrument Engineering (NIIP) named after V.V. Tikhomirov (Zhukovsky city), were reoriented to the development and production of geophysical equipment based on the scientific and technical potential accumulated in the defense sector.

In 1992, on the basis of NIIP, the management and leading employees of the institute formed the LOGIS company, which, continuing to develop explosives detectors, began the serial production of GPRs, seismic and electrical survey equipment.

In 2003, in connection with the active development of the LOGIS company and the expansion of the scope of its activities, a new direction was opened – engineering surveys using a complex of geophysical equipment. That’s when the GEOTECH company was formed.

The company GEOTECH works not only to promote geophysical equipment in Russia and foreign markets but also creates and develops new methods of engineering surveys, as well as performs complex geophysical surveys on railways, highways, airports, hydraulic structures, in the oil and gas industry and construction.

During the existence of the company, a serious material base has been formed, which allows solving complex problems by various methods based on the customers’ requirements. At the same time,  the company has acquired a team of qualified specialists who turn the problems and complexities of any project into new opportunities for the development of customers. The secret of the company’s success lies in combining the unique experience of GEOTECH in the field of engineering surveys, high-tech techniques in the production of geophysical equipment, and advanced science represented by leading Russian universities, such as Lomonosov Moscow State University, Sergo Ordzhonikidze Russian State University for Geological Prospecting, Saint Petersburg Mining University, and many others.

The main directions of the company’s work are the sale of equipment of its own production (GPRs, electrical exploration and seismic equipment) and geophysical surveys. For example, surveys on the territories of highways, monitoring the ballast prism for railways, surveys on the territory of airports, the construction and operation of hydraulic structures – currently, monitoring systems are in great demand not only for the hydroelectric power plants themselves but also for the enclosing massif.

Now the Geotech team implements projects for engineering and geophysical surveys in various industries, and also actively participates in the development of new methods of work and the production of new devices. For instance, in cooperation with Russian Railways (RZhD), new departmental technological regulations have been developed, in particular, for work with high embankments, embankments on weak foundations, in the study of karst and permafrost processes. A great deal of work has been done to develop a method for vibrodiagnostics of high embankments.

GPR is now officially accepted by the road industry as a quality control tool for road construction and reconstruction.

Instrumentation is moving towards the creation of specialized industry solutions that solve a specific range of problems. These are, for example, GPR-based ice thickness sensors, which make it possible to automatically determine the thickness of the ice cover and compare it with safety standards.

The applied geophysical methods in combination with the latest instrumental developments in carrying out work during construction make it possible to identify the causes of deformation of structures and monitor hazardous geological processes: landslide, karst-suffusion, flooding, etc. In addition, geophysical surveys allow studying the structure of permafrost rocks, determining the position of ice inclusions, taliks, cryopegs, filtration zones, determining the location of subpermafrost water inflows, and studying the dynamics of permafrost phenomena.

Our work carried out with the equipment of our own production is interesting for a wide range of specialists: surveyors, designers and builders of roads/railways/pipelines/airfields, and environmentalists.

The first GPR complex OKO was released in 1989. Today the company offers a wide range of equipment configurations, several levels of software, many accessories designed to automate and simplify the operator’s work.

The devices of our company are serial, have a complete set of design documentation and the necessary certificates. Each device undergoes a full cycle of acceptance tests, including climatic tests and mechanical tests for vibration and shock resistance.

On the basis of the company, we also consult our customers on emerging issues and conduct training in working with the purchased equipment. Purchasing equipment from the manufacturer gives customers the opportunity to provide ongoing technical support from the company’s specialists.

In working with clients and partners, we are guided by the principles of openness and trust. The company provides comprehensive support to buyers of equipment: it conducts free training courses, advanced training programs. The company’s specialists, if necessary, conduct consultations on the customer’s site.

The team that develops and supports the company. Profile of specialists

The company employs a large staff of specialists. During its existence, GEOTECH has assembled a team of responsible, reliable, and result-oriented professionals who turn the problems and difficulties of any project into new opportunities for the development of our clients.

Now the company GEOTECH is constantly increasing its activity both in Russia and the international market. The main areas are the production and release of advanced geophysical equipment, engineering surveys. Having become at the moment the generally recognized Russian leader in the field of engineering and geophysical surveys (electrical exploration, seismic exploration, and GPR), we adhere to a strategy based on the concept of high-tech development, as well as maintaining the best traditions of engineering geology and geophysics around the world.

Own serial production of geophysical and safety equipment, and the prompt participation of our developers in it, allow GEOTECH to adapt the products to the individual needs of our customers. Among the novelties of the manufactured equipment, we can note:

– Underwater GPR Nautilus with antenna unit AB-700M3P – allows carrying out work with the immersion of the device to a depth of 10 meters.

Continuous and efficient software updates, production of equipment for specific customer needs, the release of new equipment, carrying out training – all this makes it possible to supply and support our own products to all continents of the world!

The equipment of our company is actively sold in the CIS countries, China, Korea, India, Mongolia, Ecuador, USA, Turkey, Greece, Germany, Czech Republic, Bulgaria, and many others.

Thank you for your interest in our company!