The use of GPR technology for the study of freshwater ice has been known for a long time and is widely used.

GPRs allow to determine not only the thickness of the ice, but also to identify its structural features (to localize dangerous places such as cracks, flushes, voids, etc.).

It is advisable to use GPRs to ensure the safety of movement of people and transport on ice crossings and winter roads, to monitor the thickness of the ice in the last dates of river navigation, to obtain data on the ice, etc.

The physical principle of operation of the “Ice Scanner” GPR devices is based on low power ultra-wideband pulse radar which forms a radio image (radargram) from reflected signals.

The operator can use the instrument to determine the thickness of the ice under the instrument’s antenna in real time. Besides, devices can be located both directly on the ice surface, and with a separation from it.

Synchronously with the movement of the device along the ice surface, GPR’s display shows a radargram with an image of boundaries between the media (air, ice, water), and the measured values of the ice cover thickness. 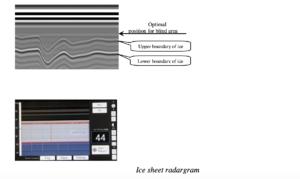 Based on a wide range of GPRs produced by our company, for ice thickness measurements two versions of portable specialized GPR ” Ice Scanner ” were developed:

The LD-1200 hand-held Ice Scanner is able to determine the structure and thickness of ice when in direct contact with its surface and at a separation from it of up to 15 cm. The maximum depth of freshwater ice sounding is up to 2 m. 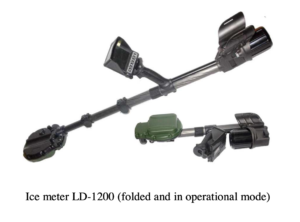 Hardware and software complex LD-400 was developed on the basis of the “OKO-3” GPR complex with a “MG-400” antenna unit for quick determination of thickness and structure of ice, localization of heterogeneity, cracks, and other defects inside the ice massif in real time.

The device has a mass of 5.5 kg and can be installed on any vehicle by means of external suspension with a separation from surface of 0.5 – 1.0 m. The depth of sounding of freshwater ice – up to 8 m, sea ice – up to 2.5 m 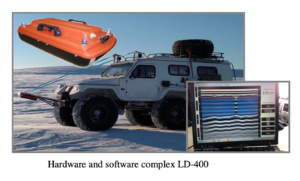