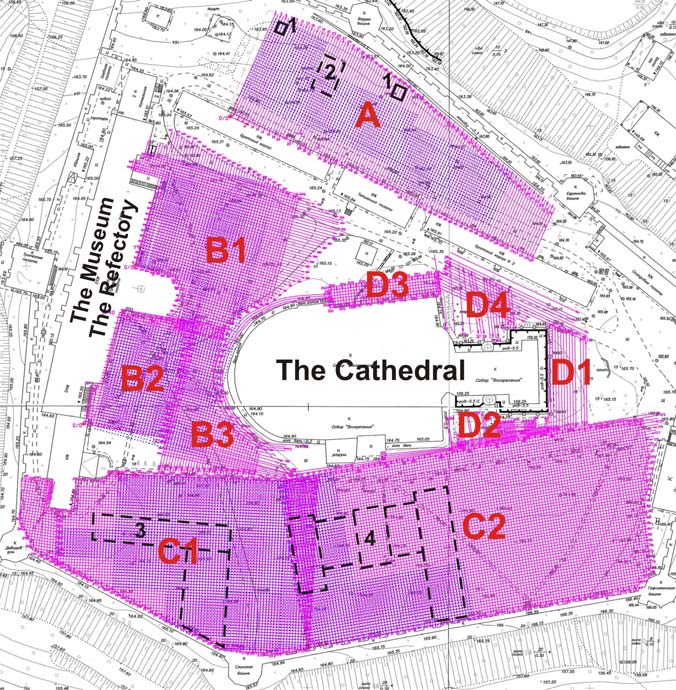 Today different geophysical methods are often applied in related fields of science. Thus application of geophysics in archeological exploration has actually separated into an individual branch characterized by specific methods of observations and data interpretation. Search and identification of archeological objects, especially those not distinguished in the relief of the daylight surface, is the issue of the day. Despite the fact that application of geophysical methods in archeology is half-century old, the surveyors are adding new effective methods and technologies to their stock. First of all we should mention GPR- position. However, it is good to remember well-behaved methods of resistance and magnetic exploration known since the middle of the last century. Russia as the rest of the world is currently favoring an integrated approach involving various geophysical methods which are jointly used for exploration of archeological monuments. Integration allows significant expansion of the circle of the tasks solved and increase in reliability of the results.
In this report the authors intend to turn the searchlight on the matters related to geophysical mapping and data processing, and to demonstrate some results obtained during exploration of the archeological objects.

Reconstruction of archeological monuments quite often poses two types of problems: search and identification of the remains of ancient constructions and search of cult burial places.

In most cases the documented history of any archeological object has many contradictions. This considerably expands the area of search and complicates the process of archeological operations’ planning. Geophysical explorations shall allow limiting the area of excavations through reconstruction of the objects location on the plan.

The main peculiarities of exploration of the cultural heritage objects consist, firstly, in mandatory application of nondestructive methods of exploration, and secondly, in necessity to explore the whole area by setting the observation points in quite short intervals. This requirement is at best satisfied by the method of GPR-positioning which allows surveying areal objects with less time spent and obtaining almost continuous information on changes of geologic environment.

Today the ground penetrating radars of OKO series developed in Russia can by their characteristics compete with the world analogues.

One of the most interesting works done recently by the group of authors is exploration of the territory of the Voskresensky New-Jerusalem monastery founded in 1656 as a Moscow region residence of patriarchs. The monastery is without any doubt considered as a pearl of Russian monastic architecture. In 2009 large-scale operations began to restore historical image of the monument. At the same time restoration of some of the lost buildings, among which were “the Czar’s old palace” built in 1656 and “the Czar’s new traveling palace” built in the XVIII century, was discussed. The monastery territory occupies about 50,000 square meters and houses almost 20 ruined objects of variable historical value. The historical plans drawn by a number of researchers in different times outline the shape and location of the objects quite conditionally. Definition of the presence, planned location and basement depth of the lost structures historical value constituted the main mission of those explorations. Besides the archeologists were interested in a number of other issues:mapping of ancient communications, wells and tunnels;

-mapping of ancient communications, wells and tunnels;
-confirmation of information on cult burial places;
-definition of the thickness of fill-up grounds matching the occupation layer.

and electrical exploration by a median gradient method. The GPR-mapping was performed on a grid of parallel profiles located at an interval of 0.5-1 m. When the surface conditions allowed, applied were orthogonal systems of observation oriented North-South and West-East, accordingly. The profiles were arranged throughout the territory free from current buildings.

The mapping technology by a median gradient method is rather simple and cost-saving. The mapping involves single-channel electrical exploration equipment. Depending on the necessary depth of exploration, a power line with galvanic grounding is arranged, measurements are taken with a small reception line 0.5-1m long by moving this line with a small step around a square plane-table located in a mid-third part of the power line. The processing results allow plotting maps of resistance distribution which when analyzed make it possible to allocate foreign objects in the environment and their nature. In such way the remains of the foundations of various constructions will appear in the resistance field by higher number, as compared to the background medium of the territory under exploration, of loamy grounds of essentially good conductivity.

Totally there were 38,500 running meters of GPR-mapping and 18,690 points of electrical exploration throughout the territory of the Voskresensky New-Jerusalem monastery (Fig. 1).

Figure 1 The plan of area. Outlines of destroyed buildings

GPR-positioning operations were carried out with 400-MHz ground penetrating radar. The distance between the traces was 5 cm, record time was 100 ns. The implemented observation system allows further use of 3D data presentation for analysis. In this case the results presented in form of horizontal peak cuts of each site (Fig. 2а) appeared to be more factual. The anomalies of clear geometrical shape and, in our opinion, corresponding to contours of the ancient foundations, are better seen on depth from 0.7 to 1.2 m. The results of geophysical efforts allowed plotting a plan of objects location that optimized the work of archeologists. All geophysical constructions matched the data of subsequent archeological excavations (Fig. 2b).

GPR explorations could not answer whether the construction remains related to earlier historical periods could exist in places of already discovered foundations. Such areas were distinguished by electrical exploration that generally confirmed the known historical information (Fig. 2c).

Figure 2 The horizontal peak cuts at the depth 0.7 m with the contours of the ancient foundations (A), the results of archeological excavations at this area (B) and the results of electrical exploration (B).

The GPR mapping also appeared to be poor information-wise in the area which is currently occupied by the monastery farm. This can be attributed to the influence of significant heterogeneity of the top repeatedly recultivated ground layer. Previously that area presumably had few wells of the

XVIII century and a number of minor buildings the exact location of which was of the historians’ interest. Those objects appeared in the form of intensive anomalies of the electric field (Fig. 3).

Figure 3 The results of electrical exploration at the area A. Resistivity map with anomalies (wells – 1 and foundation of the father Superior’s house – 2).

As for exploration of the cult burial places, the above method of presentation and analysis of GPR-positioning data is inefficient due to specific nature of the objects. In processing of data obtained in the areas of suspected burial places, analysis was made for each GPR-record separately. As a result a number of mapping signs corresponding to different types of burial places was distinguished. Examples of GPR-records with distinguished objects are shown in Fig. 4.

Besides information on the searched objects, the archeological operations are of high demand in information on the properties of the background medium, such as thickness and content of fill-up grounds corresponding to the occupation layer, and presence of water-saturated rocks. Geophysical forecast of the level of subsoil waters is very important before drilling operations are commenced on the sites of supposed excavations as it allows optimum planning of subsequent archeological explorations and helps to avoid underflooding of the cleared objects.

This work as well as a number of other works performed by the authors on the historical objects (the Novospassky monastery in Moscow of the XIII century, the Ryazan Kremlin, etc.) demonstrate high informativity of the geophysical methods in archeological and accompanying engineering missions.