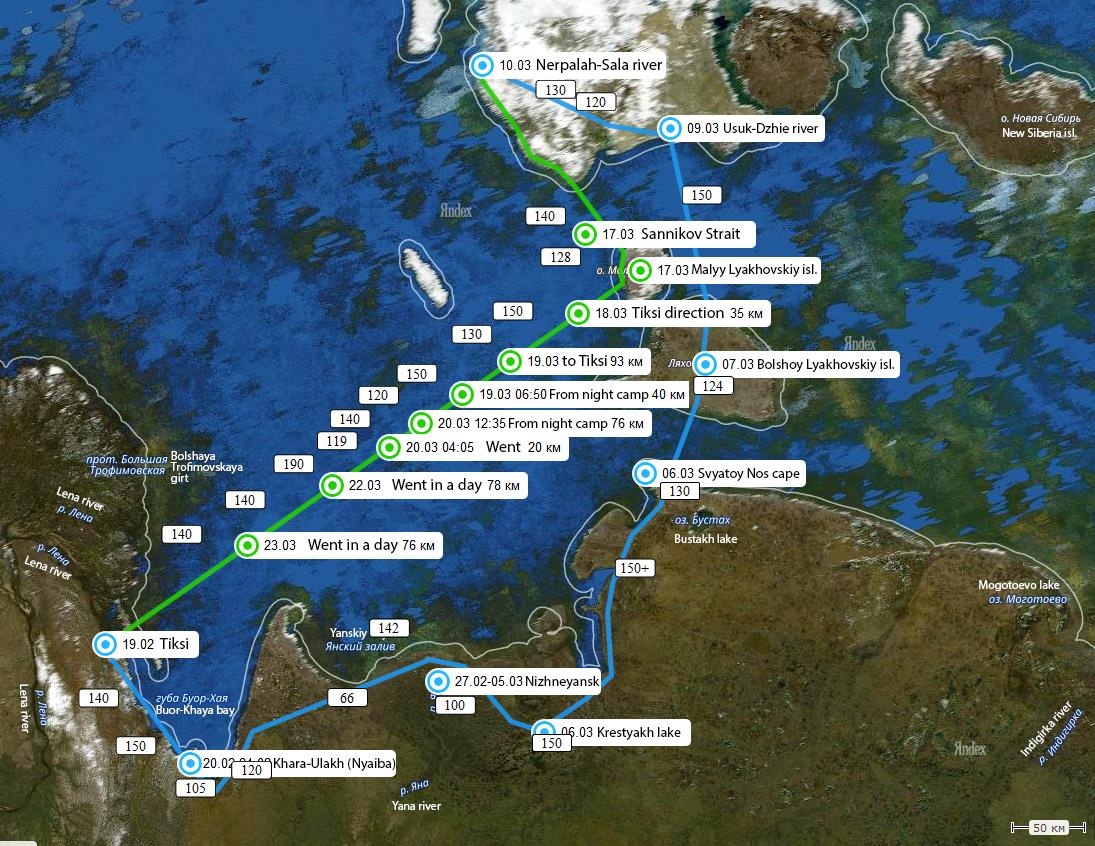 The expedition was carried out in the Republic of Sakha (Yakutia) along the route “Tiksi – Kotelny Island – Tiksi” in February-March of 2017. An approximate route of the expedition is shown in Figure 3.

The purpose of this expedition was to determine the thickness and structure of sea ice. For it the “Ice Scanner” GPR was used.

Despite the seeming simplicity of this problem, its solution is complex. This is due to the presence of many diverse factors affecting the formation of sea ice.

Sea ice is a very specific medium in relation to both electrophysical and morphological (structural) characteristics.

The droplets of frozen salt brine formed in the ice mass have an elongated shape and tend to form “chains”, the vertical inclination of which is determined by the direction of the sea current at the time of ice formation. Because of this, the electrophysical properties of the ice acquire anisotropy, that is, the dependence of the radio waves passage on the direction of the radio wave propagation relative to the orientation of the arrays of these

droplet “chains”. It is also obvious that the sea ice is characterized by changes in its temperature from -2°C at the interface with water to the ambient air temperature on the surface of the ice, which can reach -50°C.

All of the above factors make it possible for significant values of reflected signal loses to occur at the GPR’s receiver (from 20 to 100 dB/m of additional losses depending on temperature and frequency).

For this expedition, our specialists have developed, manufactured and supplied two devices: a wearable hand-held ice scanner LD-1200 and an ice scanner of increased depth LD-400 based on the “OKO-3” series GPR for installation on vehicles.

The LD-1200 hand-held ice meter is able to determine the structure and thickness of ice when in direct contact with its surface and at separation from it of up to 15 cm. The maximum depth of freshwater ice sounding is up to 2 m. The appearance of the LD-1200 ice meter is shown in Figure 5.

personnel aimed at acquisition of practical skills in device operation.

Preliminary performance tests of LD-1200 ice scanner were carried out in a climatic chamber at a low temperature of – 50°C.

The warm-up time of the display (screen) of the LD-1200 ice scanner before entering the operating mode was no more than 3 minutes, at a constant ambient temperature (- 50°C).

Full-scale tests were carried out in January 2017 at lake Gidra (town of Ramenskoye), at an ambient temperature of -3°C and -10°C.

Conditions of Experiment No1:

The radargram of sounding is shown in Figure 11. The data of the performed measurements is shown in Table 3.

Conditions of Experiment No2:

Based on the drilling data, it was found that the ice generally had a complex structure: the upper layer of ice (0-14 cm thick), the water layer (1-2 cm), the main layer of ice (20 cm). The total thickness was about 34 cm.

The data of the performed measurements is shown in Table 4.

Thus, the results of the carried out experimental studies, combined with the training of operators, have shown the following:

– At a low temperature of -50°C, the LD-1200 ice meter enters the operating mode maximum in 3 minutes after turning on the internal heating function.

– Generally, the upper snow cover has no effect on the measurement error.

– Ice thickness can be measured only in the absence of water on the ice surface.

– Ice scanner LD-1200 determines the ice thickness only up to the first water layer in case of multilayer ice.

During the Arctic expedition, the LD-400 complex, mounted on the “Trekol” all- terrain vehicle, was the main source of real-time ice reconnaissance.

The participants of the expedition have mapped (Figure 13) all points of comparative control of the readings of the devices and the real thickness of the ice sheet.

The results of this expedition revealed the urgent need to use GPR technology in ice monitoring.

It should be noted that such devices can be installed on unmanned vehicles. The latest developments made by our engineers and programmers allow for quick remote reception of sounding information on any tablet or smartphone in real time via the Wi-Fi channel at a range of up to 100 meters (and more) in the line of sight. At the same time, with the help of our devices, it is possible to perform the sounding of ice in coastal zones by placing them on unmanned helicopter-type vehicles. This will make it possible to increase the safety of coastal navigation, to choose the paths for ships through the zones with the smallest ice thicknesses, and, therefore, to save both time and resources.